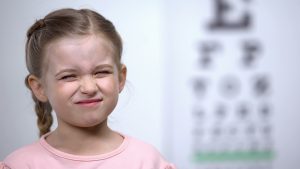 There is a push in September 2022 to create awareness about Cortical Visual Impairment (CVI). Vision Loss, facilitated by CVI, is the leading cause of vision impairment in children in the United States. It is the number one cause of pediatric visual impairment and blindness in the U.S. and developing countries. This affects as many as 3.4% of children and the majority of these children need extra help at school. There are approximately 6.8% of children younger than 18 years in the United States have a diagnosed eye and vision condition, and about 3 percent of children younger than 18 years are blind or visually impaired, defined as having trouble seeing even when wearing glasses or contact lenses (CDC).

In 2019 the American Community Survey (ACS) reported that there were approximately 547,083 children with vision difficulty. There are about 1.4 million blind children who account for approximately 70 million blind years. Blind years are the number of years children live with blindness versus 120 million blind years for adults with cataracts globally. Vitamin A deficiency is a leading cause of preventable blindness in children worldwide. The second leading cause of blindness in terms of blind years is childhood blindness (Science Direct). As the brain matures, new connections can develop in the brain to overcome the initial injury or deficit and improve function (AAPOS). It is complex at first to foresee future visual functions.

CVI is the leading cause of vision impairment in children in the United States. It is the number one cause of pediatric visual impairment and blindness in the U.S. and developing countries. Pediatric low vision is irreversible vision loss or permanent visual impairment in a person aged 21 and younger. It cannot be improved with refractive correction, medical treatment, or surgical intervention. This affects as many as 3.4% of children and the majority of these children need extra help at school. Other important factors about CVI:

Is There Currently A Cure For CVI?

This visual impairment is not a stand-alone condition.

CVI Is Not The Same As Ocular Impairment

CVI is not the same as an ocular impairment or blindness.  People may associate blindness with ocular or eye impairment. However, it is neurological. It’s a brain-based visual loss where the damage involves the brain’s visual system. Many kids with CVI often have completely healthy eyes. Presently, Cortical Visual Impairment (CVI) is the most common cause of permanent visual impairment in children.

CVI Is Not Specific To Children Only

No, adults can also develop problems with their vision after a traumatic brain injury or stroke that damages the brain. Veterans may be at higher risk for visual problems as a result of combat injuries. Davies et al reported in 2013 that children with developmental problems and disabilities, who tend to have higher rates of CVI, also have increased risks of additional mental health problems such as anxiety and depression.

CVI Symptoms May Include:

What Can You Do?

Contact us to schedule an eye exam for your child. We will discuss CVI and potential options if it is determined that your child has CVI.

We are seeing patients and following CDC guidelines.